Detecting radio waves imply converting them into an electrical current using an antenna, but this current is usually very low.

As the wave propagates away from the source, the energy carried is indeed diluted on an imaginary sphere growing bigger and bigger. As a result, the power at the receiver spot is inversely proportionnal to the distance source-receiver squared: if the distance is doubled, the received power will be divided by four.

A source emits a wave that gets "diluted" as it propagates. [source]

One therefore need some kind of amplifier to correctly pick up the signal, be it a man-made communication signal or an astrophysical one.

Nowadays we use transistor, based on semiconducting material, to achieve this amplification feature. The transistor (at least certain kind) is basiquely a current controlled resistance: the faint current to be detected is triggering a resistance variation, itself triggering a large and detectable current flow variation in a secondary circuit powered by some batteries or such.

The transistor has been invented in 1947 in Bell labs (John Bardeen, William Shockley and Walter Brattain will get the Nobel prize for this discovery in 1956). But the first detections took place as early as the end of the 19th century, in particular in 1899, when Guglielmo Marconi performed the first wireless telegraphic transmission over the english channel, thus detecting man-made radio waves on a 50 km distance.

But how did the first detections take place ? As often, with a bit of smartness, and a bit of luck. An instrument known as "coherer" was used, the funny thing being we still do not know how it works.

Here is one of the first coherer, designed by french physicist Edouard Branly while he was studying resistance variation of metal powder.

It's really just iron powder or such, enclosed in an isolating glass tube, and fitted with two electrodes for electrical current to flow through it. The system is initially a very poor conductor: its resistance is huge and the electrical current don't pass through it easily. What Branly observed though, around 1890, is that creating an electric spark somewhere around the coherer was making its resistance drop, with current suddenly flowing through it in a detectable way. Following the recent discovery of electromagnetic waves by Hertz (1888), he knew eletrical spark were generating some of these waves.

This effect is lasting in time, showing a kind of memory effect, and the coherer has to be "reset" before another detection may take place. This was one of the later improvement of the coherer, brought by british physicist Oliver Lodge, who fitted the coherer with a small hammer gently striking the glass tube and stiring the metal powder when the reset has to be made. It allowed him for detection of man made radio wave (still with electric sparks) on a 10 meter range. 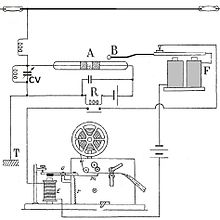 An example of radio receiver based on a coherer (with the small hammer visible near the B mark). [source]

The system was later adapted and use by Marconi for the first long distance telegraphic messages. The first message across the english channel (1899) was a tribute to Branly's work. Some first attempts to detect astronomical radio sources, in particular the Sun, have also been made using coherers. The first one was Charles Nordmann, french astronomer, who installed a 175 m long wire as an antenna in french alps to detect radio waves from the sun. Due to the lack of sensitivity of the coherer, but also especially to the unadapted frequency range he was sensitive to (sun radio emission is stronger at higher radio frequencies) prevent him and some followers to succeed in detecting it. The coherer was later replaced by more efficient systems like so called electrolytic or magnetic detectors.

Radioastronomy will thus remain nothing but a faith until 1933, when huge efforts were put in radar technologies, allowing Karl Jansky, engineer from Bell laboratories to realize the noise he was picking up was actually a milky way detection in the radio domain, the first astronomical detection at these frequencies. The fast development of radar was still increased with world war II, and a noticeable advantage was given by english engineer James Stanley Hey to the allied forces: he realized (1942) the Sun could distub the enemy radars on certain line of sight, and the germans didn't know that. Surprisingly, astronomers at that time were rather un-interested by these discoveries, made by engineers only for some decades (not to mention the huge work of Grote Reber, electrical engineer and amateur radio operator, who built a 9m diameter dish telescope in his backyard in 1937, and performing the first detection with a parabolic dish, and the first radio sky survey). Radioastronomy will nevertheless rise in lots of country after the war, the technology and people being now mature for its development.

So that's for the History part, let's get back to the coherer: how is its behaviour explained with our current knowledge ? The answer is: it is not, we still don't know how for sure how it works! Some hypothesis about oxydation state of the powder, tunneling effect, or local welding by radio wave have been proposed, but the phenomenon is still considered unexplained it seems.

There are nevertheless several interesting articles dealing with observations and possible modelling of the effect, e.g.: